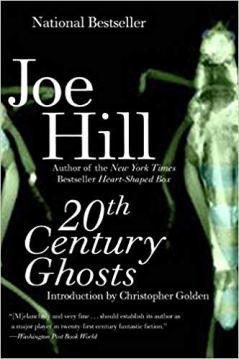 AMAZON DESCRIPTION:
From the New York Times bestselling author of NOS4A2 and Horns comes this award-winning collection of short fiction.

Francis was human once, but now he’s an eight-foot-tall locust, and everyone in Calliphora will tremble when they hear him sing. . . .

John is locked in a basement stained with the blood of half a dozen murdered children, and an antique telephone, long since disconnected, rings at night with calls from the dead. . . .

Nolan knows but can never tell what really happened in the summer of ’77, when his idiot savant younger brother built a vast cardboard fort with secret doors leading into other worlds. . . .

THE CRITICAL POINTS
I’ll be honest, when I started reading this short story anthology, I had a hard time getting into it. Many of the stories were more science fiction or horror rather than what I typically consider a ghost story.

WRITING: Hill is a powerful writer, there is no denying it, with an active imagination. His visuals are often spot on in a very disturbing way.

STORY: This collection contained 15 short stories… I’m not going to lie, I didn’t enjoy them all. There was very little character development and the formatting from story to story was not consistent. So, I will take the time to focus on the few that I did enjoy.

20th Century Ghost
The Rosebud Theatre is an old-style movie palace, haunted by the semi-legendary spirit of a young woman. The girl died during a screening of The Wizard of Oz, appears infrequently throughout the Twentieth Century, and occasionally starts conversations with a select few moviegoers. The story is told by Alec Sheldon, the theatre owner, who worries about his approaching mortality and what will happen to the Rosebud after he retires.

The Black Phone
Thirteen-year-old John Finney is kidnapped by a man named Al. Trapped in a basement room, the boy’s only hope may lie in a mysterious disconnected black phone hanging on the basement wall. The phone rings at night with the whispers of the kidnapper’s previous (and now dead) victims.

Last Breath
The story concerns Dr. Allinger, an old man who runs a “Museum of Silence” which contains the last breaths of various people, some being famous figures such as Edgar Allan Poe.

CHARACTERS: Again, not a lot of character development. Although there were characters throughout the collection that I enjoyed and rooted for, there wasn’t one in every story. Hill’s writing didn’t make me love the characters. In fact, more often than not, I despised the characters or feared the fact that somewhere out in the world there were people really like them. With that said, I think Hill accomplished exactly what he was setting out to do.

APPEARANCE: The cover portrays bugs, which won’t make sense until you read You Will Hear the Locust Sing. I have to say; this story was one of my least favorites. Probably because it was, in a word, gross.

MY FAVORITE QUOTES:
“You get an astronaut’s life whether you want it or not. Leave it all behind for a world you know nothing about. That’s just the deal.” ~ Art in POP ART

“Wait. There are all different kinds of silence. The silence in a seashell. The silence after a gunshot. His last breath is still in there. Your ears need time to acclimate. In a while you’ll be able to make it out. His own particular final silence.” ~ Alinger in LAST BREATH