Would you prefer to watch the video review, instead of reading it? CLICK HERE

AMAZON DESCRIPTION:
When Henrietta Leavitt begins work at the Harvard Observatory in the early 1900s, she isn’t allowed to touch a telescope or express an original idea. Instead, she joins a group of women “computers,” charting the stars for a renowned astronomer who calculates projects in “girl hours” and has no time for the women’s probing theories. As Henrietta, in her free time, attempts to measure the light and distance of stars, she must also take measure of her life on Earth, trying to balance her dedication to science with family obligations and the possibility of love. The true story of 19th-century astronomer Henrietta Leavitt explores a woman’s place in society during a time of immense scientific discoveries, when women’s ideas were dismissed until men claimed credit for them. Social progress, like scientific progress, can be hard to see when one is trapped among earthly complications; Henrietta Leavitt and her female peers believe in both, and their dedication changed the way we understand both the heavens and Earth.

My 2 Cents:
This is a beautiful play about one of the first women who worked in the field of astronomy. The reader (or audience if seeing the play life) get to see how she balances, or fails to balance, life while still pursuing her dream of reaching for the stars. It is intelligent, artistic, heart wrenching, and emotionally moving.

I started reading this play with no knowledge of what it was about other than that it had to do with female astronomers, or ‘computers’ as they were called back in the early 1900s. I was happy to find that it was not only beautifully written with humor woven throughout the story, but it avoided the typical traps stories like this often fall into such as only focusing on the negative aspects of women in what is considered a “man’s world”, over dramatizing work and home life balance… or lack thereof, or not sharing all aspects of the story such as family/science/and love… there is room for it all and I believe that Gunderson successfully brought it all together.

CHARACTERS: Through her writing, Gunderson brings to life each of the five characters in such a beautiful way. They each have their own history, their own desires, and their own goals. Life ends up differently for each of them, and as with our lead character, Henrietta, they all experience

APPEARANCE: it’s a plain colored cover, in this case blue, with black lettering, typical of a Dramatists Play Service playbook. I personally prefer this style of cover for plays because I want the writing to tell me what the characters look like, rather than an image on the cover.

MY FAVORITE QUOTES:
“I used to think that to be truly alive I needed answers. I needed to know. But all this does not in fact need to be known, does it? We do. Because the real point… is seeing something bigger. And knowing we’re a small part of it, if we’re lucky. In the end that is a life well-lived.” ~ Henrietta in Silent Sky 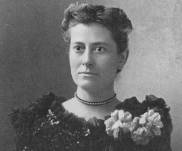 Henrietta Leavitt, (born July 4, 1868, Lancaster, Massachusetts, U.S.—died December 12, 1921, Cambridge, Massachusetts), was one of the first female American astronomers. She was known for her discovery of the relationship between period and luminosity in Cepheids, pulsating stars.