Today, I’d like to welcome Kristan Cannon, author of The Last Iron Horse, to my blog.

Thank you so much for joining us today.

What is your name and where do you call home? I’m Kristan Cannon, and I currently live in Sudbury, Canada.

Do you have a pen name? Yes, but I don’t always write under the pen name.  I have this litmus test—when my grandmother is too embarrassed to show her church friends my books then I use my pen name.  Most of the time I don’t have to.

What is the name of your most recent book and if you had to sum it up in 20 or fewer words, what would you say? The Last Iron Horse – An almost retired salesman survives the end of the world and becomes the Master Ranger of the last known bastion of civilization.

From the title, I would have guessed it had to do with a train or trains. That’s in there.

Is the above book part of a series? Yes, it is.  It’s the second book in The Kingdom of Walden Trilogy.

What is the title of the first book? After Oil 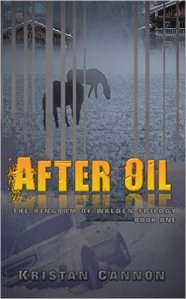 How did you come up with the covers of your books? Who designed the covers? Believe it or not, my Dad helped me with that.  Art tends to run in our family, and my Dad is a painter, sculptor, and he has other mediums he likes to work with too.  The first book, After Oil, was originally designed by Jeanette Mathews but the second edition (after the series was retouched to look like a set) was done by my father.

That is really cool. I love it when family members get involved, helping each other reach their goals and follow their passions.

What or who inspired you to start writing? And how long have you been writing? I’ve always been writing.  It just took me a little bit to decide to actually try to get a novel published.  I have been freelancing and dabbling in fan fiction and original short stories for years.

Did you listen to any particular songs while writing your book(s)? Oh, I’m all over the place. It depends on the mood and the feel I’m looking for.  If it’s grittier I like a bit of metal and opera/metal.

How did you come up with the title for your book(s)? After Oil refers to how civilization came to an end.  The Last Iron Horse refers to a train and that the train is almost an antagonist of its own.  It pervades everything.  Of course, an “iron horse” is an old west reference to a train and the fact that this train is the last known train still running leads to the title of the second book.

Do you have a book trailer? If so where can we watch it? I, unfortunately, don’t have one.  I’m working on fixing that, though.

Well, I look forward to seeing it when its complete.

Do you prefer e-books, paperbacks, hard-covers or audio-books? Depends on the situation.  I don’t have a lot of space where I live, so the vast majority of my library is in e-book form.  Paperbacks are affordable, and physical, so my starter library was comprised of mainly paperbacks.  When I’m driving I’ll listen to an audio.  My dream library would be a mix of both hardcover and trade paperbacks, with a few audio book CDs to round everything out.

Are you a self-published/Indie author? Indie, through a publishing house.

Which publishing house are you using and why did you select that one? I usually publish through KCEditions, and the reason I chose that publisher was because it was a non-profit cooperative of indie authors, which I had a hand in founding but it’s outgrown me.  Sometimes I self-publish, sometimes I still work at getting my short fiction published traditionally, other times I go through KCE.

If you’re a self-published/Indie author what made you go that route instead of the traditional publishing route? I find that indie publishing results in work that is less mainstream, and more transformative.  Work that some bigger publishers would reject for being a bit out there.  I wanted to tap into that familiar creative vibe.

As an indie author myself, I can completely relate to that. I’m sure many of us can.

Have you ever read a book more than once? And if so what was it? Yes.  I read the cover off of James Clavell’s Shogun.

What is your opinion of novellas? A valid literary work.  I’ve studied more than a few in English Lit, and they’ve been just as good as longer, or even shorter, work.

Have you ever read a book just based on its cover? No.  If I did much of the older work would have been left on a shelf.

What is your favorite film based on a book? That’s a good question as I’ve liked a few.  While they did cut out quite a bit from the book, I loved Memoirs of a Geisha, but my favorite has to be Grapes of Wrath.

Couldn’t agree more about Memoirs of a Geisha. I loved that book. I think I’ve read it 4 or 5 times. I enjoyed the movie, but they did leave out some pivotal moments that I had hoped to see.

What is your favorite book genre at the moment? Urban fantasy.

What books have made it onto your wish list recently? And why? Even though I had to read it when I was in school, I’d like a copy of To Kill A Mockingbird.  I think, especially with Harper Lee’s passing, that not having this book in my collection is a gross oversight and I did like the book when I was younger.  Now that I’m a bit older, and I understand what she was trying to say a bit more, it also seems very timely when the mood gripping everyone today.

There’s an indie in the NaNoWriMo group that has books that I want to add to my library, simply because he’s that good and his books are that hard to get a hold of.  I own a bookstore that has a section for rare, and NaNo, books and his ticks off two… so also anything by Shiv Ramdas.

How interesting. Actually, my first novel, Awaken, was written during NaNoWriMo. Well, the first draft was. It took months after that of re-writes and edits before the final draft, but I think NaNoWriMo is such a great tool and experience for authors, it’s great that you are helping to support those authors books by selling them in your store.

What book are you reading at the moment? And in what format? Illusional Reality, by Karina Kantas in e-book.  And, let me say this, I am thoroughly loving it.

I actually just interviewed Karina on my blog. She is a very sweet woman, and a talented author. I’m glad to hear you are enjoying her book.

If you could invite any four (4) celebrities (alive or dead) to your dinner party, who would you invite and why?

I think the discussion these four could start up would be not only enlightening, but also quite lively as I know a few of them don’t see eye to eye on a few issues but they could at least be civil about it and this would make for some interesting fireworks.

What’s the best advice that you have been given when it comes to writing? “Just sit down and write.  Editing is what comes after and will take your raw thoughts and make it a book.”

The second piece of advice: “Money flows to the author, not the other way around.”

I don’t think that gets passed around nearly enough.

I’m not sure I understand that last bit of advice. Can you explain what you mean by “Money flows to the author, not the other way around”? There are too many predators out there determined to separate an indie from their hard earned money through shady, and overpriced, “author services”.  Publishers who charge thousands of dollars, up front, to “publish” one book and exist to milk the author of everything they can get through assorted services that are subpar and overpriced.  There’s people out there claiming to be editors but couldn’t edit themselves out of a paper bag and also want thousands for a shoddy job.  The reality is, like, with traditional publishing, a self-published author really shouldn’t be paying for services that should be paying them.  Paying for a good editor is one thing, as is paying for a good cover artist, interior formatter, or even a professional publicist.  Those are legit services that would, and should, be getting a decent living for doing what they do – whether through a publisher or through freelancing.  Actually putting your book to print isn’t one of them… or at least, not thousands up front and then again per copy for distribution until the author is only getting nickels and dimes per book sold (print or not), not when companies like IngramSpark, Lulu or Createspace exist who don’t charge an exorbitant fee upfront (**Ingram does, but it’s $50 and the profit made per book is greater than CS or Lulu afterwards, and the per copy discount to order your own book is greater… and their distribution is top notch.).  Bottom line is the author shouldn’t be paying more than what they will get back just to get their book to shelves.

This is WONDERFUL advice! As an indie author, I publish my e-books through booktango.com because they don’t charge to publish AND – this is a big one – I GET 100% Royalties. Yup, I said 100% ROYALTIES!!! I publish my paperbacks with CreateSpace, and it is free to publish, but I have found that I am paid pennies on my sales. 😦  However, I have stayed with CreateSpace because they have EXCELLENT customer service.

Do you have any hobbies that aren’t related to reading & writing? Sailing, auto mechanics (I love cars), sculpting, photography, gardening… just to name a few.

Kristan Cannon was born in Kirkland Lake, Ontario and educated in North Bay and Toronto.  She is a staunch supporter of literacy, reading, and young writer’s programs. She also holds a current membership with The Indie Writer’s Network and is a member of the NaNoWriMo Ambassador’s program.

When not researching or writing, Kristan exists for sailing her classic wooden sailboat with her cat, friends, and family… or for video games and books when snow and ice have the boat locked in its slip and she can’t get away.

Book Two of the Kingdom of Walden Trilogy

Their biggest test is hurtling toward them…

With the corrupt Colonel to their east, and the slavers to their west, determined to both call Walden’s rich resources their own Derek, Sheridan, and Garrett have to act quickly to make sure their home isn’t the next to fall to the pressures from outside… and within.

Derek swore he would never get pulled into another adventure…

After nearly being killed protecting Lively, Derek returns to Whitefish and learns Garrett was at the nearby High Falls.  Still recovering from the injuries gained in Lively— with no guarantee of still finding his friend alive—he embarks on an expedition up to High Falls to find Garrett.

But finding Garrett ends up being the least of their worries when he discovers that the slavers to their west have an operating train with a clear path straight into the fledgling Kingdom of Walden’s heart–and to their new Queen.

A big thank you again for joining me today. I hope everyone enjoyed reading about Kristan and that you will support another great indie author by picking up a copy of her books today.