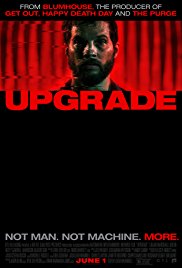 Upgrade – Set in the near-future, technology controls nearly all aspects of life. But when Grey (played by Logan Marshall-Green), a self-identified technophobe, has his world turned upside down, his only hope for revenge is an experimental computer chip implant called Stem (voice by Simon Maiden).

I wasn’t expecting any more than an action-packed movie along the lines of the Bourne movies (which I loved), but I ended up loving this movie for a completely different reason. It’s not all action and drama! It’s filled with laughs, which considering how dark the film is was very unexpected. Leigh Whannell, the film’s director, has packed this film full of drama, shock, action, and even some heartbreak. There’s never a dull moment as the film has you on the edge of your seat the entire time!

I can’t end this review without saying that Logan Marshall-Green was perfectly cast. PERFECTLY cast. He made the characters inner struggle believable in exactly the way this film needed. You feel for his character, you’re angry with him, grieving with him, and want him to win even if it means doing unspeakable things.