It’s no secret… Stephen King is my favorite author and I just don’t see that changing any time soon. Now, it doesn’t mean I love everything he writes, because I don’t. However, I do love most of it!

The thing is, Stephen King is the author that made me first fall in love with reading. It was his books that got me through not only my youth but also some pretty tough times in my life. Lonely times.

So, as an author myself, I often turn to my “mentor” and seek his guidance. I ask WWSKD – What Would Stephen King Do? I’m actually thinking about getting #WWSKD bracelets made… I wonder if other authors think the same thing. Maybe I should start a club… I digress. 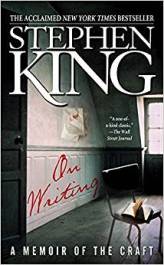 Stephen King has written at least 90 books… probably more. Check out his online library HERE! His books have sold more than 350 million copies. AMAZING, right?! It doesn’t matter if you love them, like them or even hate them, you have to admit 90+ books is impressive. He has even written the manual on writing… literally! In his book, On Writing Stephen King shares all his thoughts on writing including his ‘rules’ which he admits, like most authors, even he breaks from time to time too.

He also shares a lot of advice for aspiring writers. I’ve picked some of my favorite quotes and shared them here:

1 thought on “WWSKD – What Would Stephen King Do?”