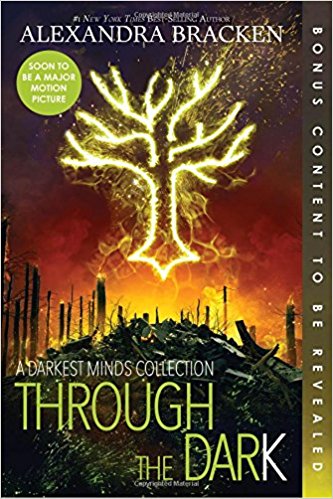 AMAZON DESCRIPTION:
Don’t miss this breathtaking collection of stories set in the world of the best-selling Darkest Minds trilogy, now in paperback:

IN TIME
A desperate young man is forced to make a terrible choice between his own survival and the future of a little girl who won’t speak, but who changes his life in ways he could never imagine.

BEYOND THE NIGHT
The camps are closed. A tyrant president has been deposed. But for many Psi kids living rough, there is no home to return to, no place for them in a country devastated by the past and anxious about the future. Every day is a struggle for Sam, who knew all the rules at Thurmond and has been thrown into a terrifying and uncertain new life. But there’s more at stake than Sam’s own survival. She once made a promise to someone she loves, and the time has come to fulfill it.

From New York Times best-selling author Alexandra Bracken comes a collection of three hauntingly beautiful novellas set in the world of the Darkest Minds series. In the most harrowing of times, it takes a ferocious strength not only to survive, but to stand up for those who cannot fight their own battles. The characters in these stories–some new, some familiar–face impossible missions, and the hardest of all may be protecting the last flicker of hope in a seemingly endless night.

WRITING: Overall the writing in this set of novellas meets the level you would expect from a Bracken story. She is a wonderful author, one of my new favorites. Definitely one of the newest authors to join my list of “I’d buy their book even if I didn’t know what it was about.” The only reason this book is getting a lower overall review rating is because of the third novella, Beyond the Night. I just didn’t really care for the story… or maybe it was the Character Mia. I just didn’t feel like her character was that fleshed out. Compared to all the other characters in the series, I just didn’t care for Mia.

STORY:
I’ll take this section one story at a time…

• In Time
If you were to read these stories in chronological order, In Time would come right after book one. However, having read the first three books in the series before picking up this one, it is my recommendation that you read the novellas after you read the first three books… Why? Because in order to truly appreciate the story of Gabe, a want to be skip tracer, you really have to have a deep hatred for skip tracers in the first place.

Gabe is just like all the other adults living out in the world Bracken has created for us. Those too old to be afflicted by IAAN but those not pulled in to work for the government at the “rehabilitation” camps. He is struggling… hungry… down on his luck… Basically, he is just barely surviving. He sees becoming a skip tracer as a way to turn his luck around. Through his struggle… his journey… we, as readers, get to see a completely different side of the story. We get to sympathize with “the enemy” in a why we never could have only reading the main books of the series. Bracken does a wonderful job telling Gabe’s story, and even though I didn’t want to, it was hard not to understand his decisions.

• Sparks Rise
This was my favorite of the three novellas. I LOVED glimpsing into the mind of Lucas (a RED) and learning more about Sam (a GREEN), who we only briefly meet in book one. I loved the tragic love story Bracken introduced with these two characters. Their struggle… their pain… their anger… their innocence. Everything about Sam and Lucas feels right and yet… Well, I won’t tell you what happens, but if for no other reason, you should pick up Through the Dark to read this story.

• Beyond The Night
I didn’t love this story. I didn’t hate it either, but comparing it to everything else in this series, it just feel flat. Although I love the characters of Sam and Lucas, Mia just fell short for me. She seemed like an afterthought… as if her character wasn’t fully fleshed out. Mia felt to young and yet to mean-spirited for her age. I’m not really sure that is what Bracken was going for, or maybe it was. I didn’t believe Mia as a stand-alone character, but instead felt like she was pieces of other characters pulled together haphazardly to form one.

This story started on page 217, but it wasn’t until page 289 that I feel like the character issues I had with Mia finally started to fade away and I actually started to enjoying it. If this had been a Stephen King novel that wouldn’t have been a big deal, but it was a 183-page novella not a 500-1000 page mega-novel. At page 289 the story did get good and I quickly finished after that, turning page by page eager to find out how it would end. And end it did, beautifully.

If this had been the last book in the series, I would have been satisfied, but it isn’t. The Darkest Legacy is up next… Not sure I will read it right away as I have a number of other books on my list, but I’m sure that I will eventually get to it.

CHARACTERS: I gave characters a 3-star review… only because 2 out of 3 of the stories had excellent character development. 2 out of 3… That third story, Beyond the Night, just didn’t meet my expectations for what I have become accustomed to when reading Bracken.

APPEARANCE: Beautiful! Stunning! Breathtaking! I’m sure you’ve learned by now that I absolutely love Bracken’s covers. This one is no different. You can almost feel the fire burning just beneath the cover. The character quote for this one is, “I want to feel every ounce of pain and happiness life can serve up, because it’ll mean I’ve survived.” When I first read the quote, before reading the book, I though I knew who would have said it… and maybe that character would too, but I was wrong. I was wrong in such a good way. Hold your breath… wait for it… You’ll be glad you did!

Check out my YouTube channel and the video review here:

Make sure you hit subscribe so you never miss a video!

1 thought on “Through The Dark (A Darkest Minds Collection)”