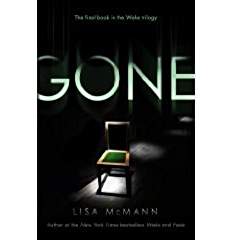 AMAZON DESCRIPTION:
Things should be great for Janie—she has graduated from high school and is spending her summer with Cabel, the guy she’s totally in love with. But deep down she’s panicking about how she’s going to survive her future when getting sucked into other people’s dreams is really starting to take its toll.

Things get even more complicated when she meets her father for the very first time—and he’s in a coma. As Janie uncovers his secret past, she begins to realize that the choice thought she had has more dire consequences than she ever imagined.

Janie thought she knew what her future held. And she thought she’d made her peace with it. But she can’t handle dragging Cabel down with her.

She knows he will stay with her, despite what she sees in his dreams. He’s amazing. And she’s a train wreck. Janie sees only one way to give him the life he deserves: She has to disappear. And it’s going to kill them both.

Then a stranger enters her life—and everything unravels. The future Janie once faced now has an ominous twist, and her choices are more dire than she’d ever thought possible. She alone must decide between the lesser of two evils. And time is running out…

EXCERPT FOR GONE:
He reaches toward her, his fingers black and bloody, his eyes deranged, unblinking. Janie is paralyzed. His cold hands reach around her neck, squeezing tight, tighter, until Janie has no breath left. She’s unable to move, unable to think. As his grasp tightens further around Janie’s neck, his face turns sickly alabaster. He strains harder and begins to shake.

She has no fight left in her.

WRITING: Out of all three of the books in this series, I think this is the only one that is truly YA. Lisa McMann’s writing style has been consistent and enjoyable although I think there were a few more typo’s and editing issues in this book than there were in the previous two books.

STORY: What would you do if out of nowhere the father you’ve never known is back in your life? The kicker… he is unconscious and dying.

Although I like the way GONE ended, it doesn’t feel like a true ending to the story. It seems like there could be another book to really tie up all the loose ends and give us closer with Janie and Cabel and what fate brings to her.

I’m looking forward to seeing what else Lisa McMann has written and what she come out with next.

APPEARANCE: There are two covers for this book. I have the simple black and green cover with the lonely chair in the middle. It is intriguing and grabbed my attention the moment I saw it. The other cover, with the photo of who I can only image is meant to be Janie and Cabel is not my favorite. I prefer to conger up the images of the characters on my own, as I read. These to people just don’t really bring the characters to life for me.

MY FAVORITE QUOTE: “I lurve you, too, you big lumpy monster man.”