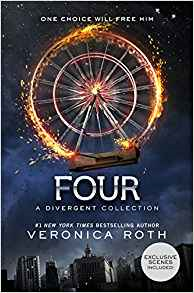 AMAZON DESCRIPTION:
Fans of the Divergent trilogy by #1 New York Times bestselling author Veronica Roth will be thrilled by Four: A Divergent Collection, a companion volume that includes four pre-Divergent stories plus three additional scenes from Divergent, all told from Tobias’s point of view. This collection also makes a great pick for fans of the blockbuster movies who want to delve deeper into the character played by Theo James.

Readers first encountered Tobias as “Four” in Divergent. His voice is an integral part of Allegiant. Readers will find more of this charismatic character’s back story told from his own perspective in Four: A Divergent Collection. When read together, these long narrative pieces illuminate the defining moments in Tobias’s life. The first three pieces in this volume—”The Transfer,” “The Initiate,” and “The Son”—follow Tobias’s transfer from Abnegation to Dauntless, his Dauntless initiation, and the first clues that a foul plan is brewing in the leadership of two factions. The fourth story, “The Traitor,” runs parallel with the events of Divergent, giving readers a glimpse into the decisions of loyalty—and love—that Tobias makes in the weeks after he meets Tris Prior.

Buy it HERE on Amazon!
THE CRITICAL POINTS

WRITING: Veronica Roth takes us deep into Four’s perspective with this one, and she doesn’t disappoint.

STORY: Four, the 4th book in the Divergent Series is actually a set of novellas. What it reminded me, after the disappointment of Allegiant, is that I really enjoy Roth’s storytelling and the world she created within the Divergent Series. Seeing her world through Four’s eyes was a great way to wrap up the series and give her readers the closure we didn’t get with Allegiant.

I won’t give anything away, but I will say even if you were disappointed with Allegiant, you have to pick up Four! Give Roth another chance and read these awesome novellas. It’s a fast-paced read, I think I finished it in one night… maybe two. You won’t be disappointed.

If you’ve already read Four, what did you think? Please share your thoughts by leaving a comment below.

APPEARANCE: The cover blends well with the rest of the Divergent series books and fits the story VERY WELL! I love the imagery as well as the meeting behind the Ferris wheel.

“One thing I know: For helping me forget how awful the world is, I prefer her to alcohol.”

“Dead people can be our heroes because they can’t disappoint us later; they only improve over time, as we forget more and more about them.”