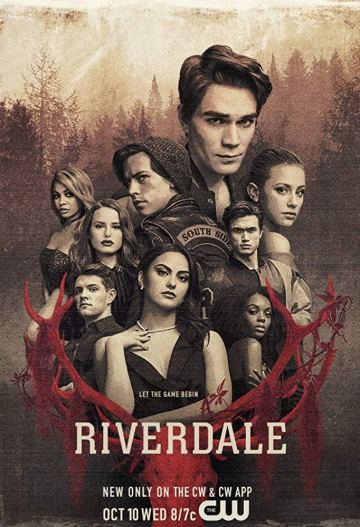 Blurb:
A subversive take on Archie and his friends, exploring small town life, the darkness and weirdness bubbling beneath Riverdale’s wholesome facade.

Storyline:
After the death of one of the rich and popular Blossom twins on the 4th of July, the small town of Riverdale investigates the murder. The series starts in September, the beginning of a new school year, that brings with it new students, relationships, and reveals the mysteries of the past 4th of July. Written by ahmetkozan

My 2 Cents:
I grew up reading the Archie comics… I loved them! The characters were fun, relatable, and I enjoyed the banter back and forth and the constant rivalry between best friends Betty and Veronica to see who would Archie liked best.

Although I am enjoying the show, Riverdale, which is based (loosely in my opinion) on the Archie comics, it seems to be missing something.

In the comic, the character of Archie, was a clumsy teen boy who loved music and girls.
In the show, he still loves the girls and music, but he seems more teen angst than anything else. He had an affair with his teacher, Ms. Grundy who the show cast as a pretty young woman. Let me tell you – if you don’t already know – Ms. Grundy was an old, grey haired, mean woman in the comics. Weird choice for casting if you ask me.

Betty Cooper – The girl next door. Yeah, the show got her right. The actress, Lili Reinhard even looks like the Better Cooper in the older comics. She, and jughead, are probably my favorite characters in the show.

Jughead Jones – Probably the most different in terms of character changes from comic to show. In the comic he was a lazy guy who didn’t care about girls, relationships, working… anything. In the show, he writes – all the time – and is in a relationship with Betty (Spoiler Alert). He even joined a gang… Didn’t see that once coming.

I don’t remember the comics having nearly the amount of crime either. Sure, there were small things, but they always worked themselves out. Riverdale is full of sex, murder, cover ups, drugs, and mob activity. Not the most wholesome show to be presenting to kids and yet it is marketed as a kid show – pre and young teens.