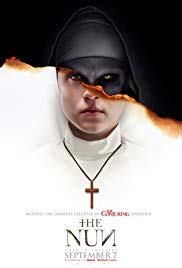 Blurb:
A priest with a haunted past and a novice on the threshold of her final vows are sent by the Vatican to investigate the death of a young nun in Romania and confront a malevolent force in the form of a demonic nun.

Storyline:
When a young nun at a cloistered abbey in Romania takes her own life, a priest with a haunted past and a novitiate on the threshold of her final vows are sent by the Vatican to investigate. Together they uncover the order’s unholy secret. Risking not only their lives but their faith and their very souls, they confront a malevolent force in the form of the same demonic nun that first terrorized audiences in ‘The Conjuring 2,’ as the abbey becomes a horrific battleground between the living and the damned. Written by Warner Bros.

Ok, before you get the wrong I idea, I do still think this movie is worth watching. Rent it, don’t buy it. The story is subpar and the acting is just ok, but there were a few good jump scares – my favorite part of scary movies. Although, the best part wasn’t the movie at all – it was who I was watching it with. My daughter says she loves scary movies, but she screams the whole time. THE WHOLE TIME – even when it isn’t scary. So, her fear and excitement at being scared made the movie that much more fun for me too.

So, find a friend or a loved one who loves to be scared and jumps at everything and watch this movie with them.

I guess the only other things I can say about the movie is that the special effects were better than I expected and Bonnie Aarons, the actress who played The Nun, was awesome! I’m not going to lie – she was pretty creepy scary looking.