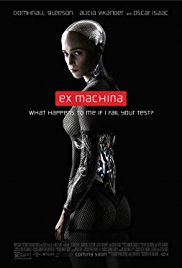 Blurb:
A young programmer is selected to participate in a ground-breaking experiment in synthetic intelligence by evaluating the human qualities of a breath-taking humanoid A.I.

Storyline:
Caleb, a 26-year-old programmer at the world’s largest internet company, wins a competition to spend a week at a private mountain retreat belonging to Nathan, the reclusive CEO of the company. But when Caleb arrives at the remote location, he finds that he will have to participate in a strange and fascinating experiment in which he must interact with the world’s first true artificial intelligence, housed in the body of a beautiful robot girl. Written by DNA FILMS

My 2 Cents:
OK, I’ll admit – I did not see this one in the theatre. Big surprise, right? I mean it did come out back in 2014 and I’m just now reviewing it. I had never even heard of Ex Machina until the image of it scrolled across my Netflix feed.

I had no clue what to expect, but I tend to like AI movies so I gave it a shot.

Ultimately, this movie is about a computer programmer, Caleb – played by Domhnall Gleeson, who “wins” a chance to be flown to the estate where the owner of the company he works for, Nathan – played by Oscar Isaac, lives. Caleb gets there… to what is basically this massive, underground bunker where Nathan lives, works, and creates. His boss makes him sign an NDA and then shows him this beautiful AI woman, Ava – played by Alicia Vikander, that he created and keeps locked up – secluded from the outside world. He explains that the reason he brought Caleb there was to spend a week talking with Ava, questioning her, etc. to see if she is a real AI or just another robot.

This really was a tension filled movie. Basically, because the acting was fantastic!!! I was captivated by the acting AND the dialogue. I have to hand it to Alex Garland, the writer and director, for such a well thought out, thought-provoking script. I was so surprised to find out that this was the first movie he had ever directed. WHAT?!?! Yup, its true.

As the viewer, you don’t know who to trust… who to believe… who to care for. That is part of the genius behind the writing. It also gives credit to the execution of the acting and directing.

I’m not going to tell you what happens, and I really won’t tell you the twist at the end. Yes, there is a twist. What I will tell you is – this is an EXCELLENT MOVIE!!!! If you haven’t seen it, you need to rent this one, it will not disappoint.