Would you prefer to watch the video review, instead of reading it? CLICK HERE 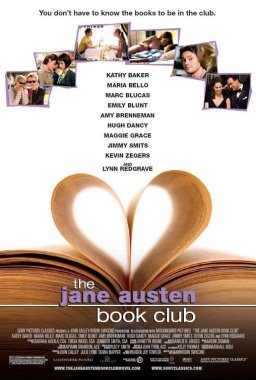 BLURB:
Six Californians start a club to discuss the works of Jane Austen, only to find their relationships – both old and new – begin to resemble 21st century version of her novels.

STORYLINE:
The Jane Austen Book Club explores Austen’s adage that general incivility is at love’s essence. Sylvia’s husband dumps her for another woman, so Bernadette and Jocelyn organize a book club to distract her. They recruit Sylvia’s daughter Allegra; Prudie, a young teacher whose marriage may be on the rocks; and Grigg, a sci-fi fan who joins solely out of his attraction to Jocelyn. The six book club members read and discuss one Austen novel per month. While Jocelyn attempts to peak Grigg’s interest in Sylvia, she fails to see her own interest in him rising. Allegra falls in love with a woman she meets skydiving. Then, after unexpected heartache she is able to mend her heart through a new relationship. Prudie contemplates an affair with one of her students and may take things a little to far. Sylvia’s ex-husband keeps popping back into her life and eventually tells her he still loves her. By the end of the movie, the truth about each of our characters is revealed.

MY 2 CENTS:
I’m not going to lie, this is a chick-flick. I love a good romantic comedy chick-flick every now and then, but they are not my typical go-to movie. With that said, as an author and an avid reader, I LOVED THIS FILM!

The cast is amazing… In fact, I really can’t image a better cast. With Emily Blunt, Maria Bello, Amy Brenneman, and Kathy Baker taking the lead, this movie was destined to be a success. And a story line that manages to infuse the characters’ lives with pieces of Jane Austen’s fictional world is just plain fun.

Like most chick-flicks, this film isn’t about wowing the viewers with amazing cinematography and extraordinary special effects. This film relies solely on the dialogue and the actors’ abilities to communicate their emotions to the audience. The character development within each relationship as well as individually gives the viewer so much to watch, explore, and relate to. Of course, not everyone will be able to relate to every character… but that is the beauty, there is a character for everyone.

I believe that if Austin were alive today, she would be proud of the way this film utilized her themes and wove them into the lives of the characters beautifully.

MY FAVORITE QUOTES:
“Let us never underestimate the power of a well-written letter.” ~ Bernadette

You can watch the official trailer here: 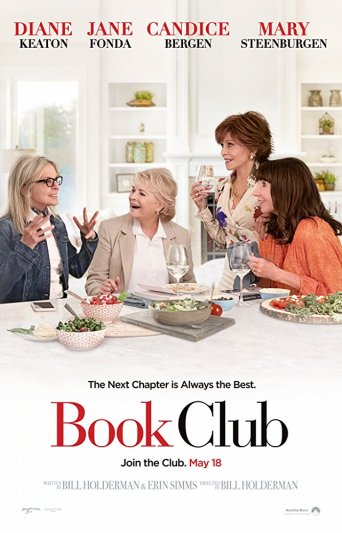 IMDB DESCRIPTION:
Four lifelong friends have their lives forever changed after reading 50 Shades of Grey in their monthly book club.

REVIEW:
Amazing cast!!! I just have to put that out there right from the start. This is a comedy, which is obvious if you’ve seen the trailer, but it’s so much more than just a comedy! The script dives into some pretty serious topics too; grief from the lose of a spouse, retirement, adult children who end up parenting their parents, dating in your later years, and the cause and effect of life choices!

I definitely recommend this one. I laughed so hard and truly enjoyed the wonderful characters these talented women brought to life.

Now, the real question… who wants to start a book club with me?!?! I’m ready to commit to a night a month to discussing books and drinking wine!

So, have you seen Book Club? Have you read Fifty Shades Of Grey? If you answered yes, to either of these questions, what did you think? Please share your thoughts!